Photo prior to the Skyridge Groundbreaking Ceremony. 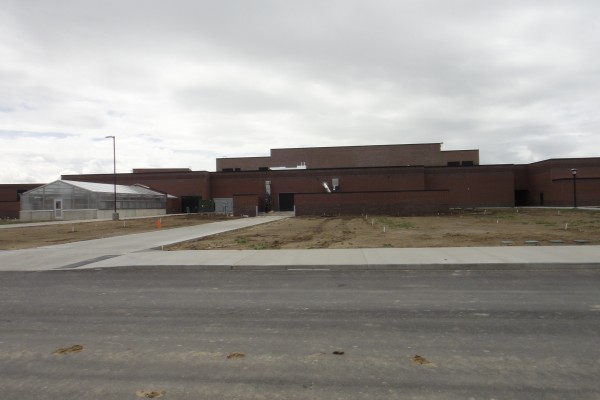 The north side of Skyridge High School today.

A scout group leading the Pledge of Allegiance at the Skyridge Groundbreaking Ceremony on April 29, 2014. 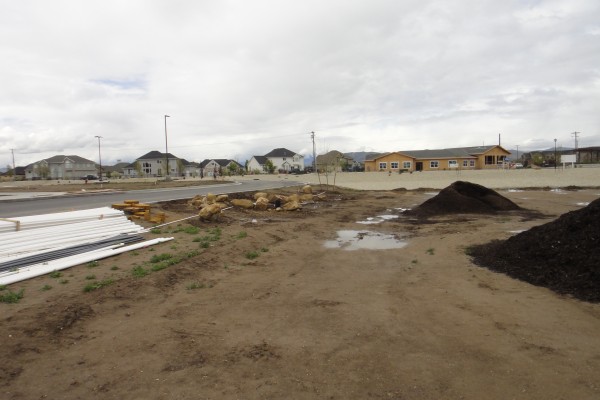 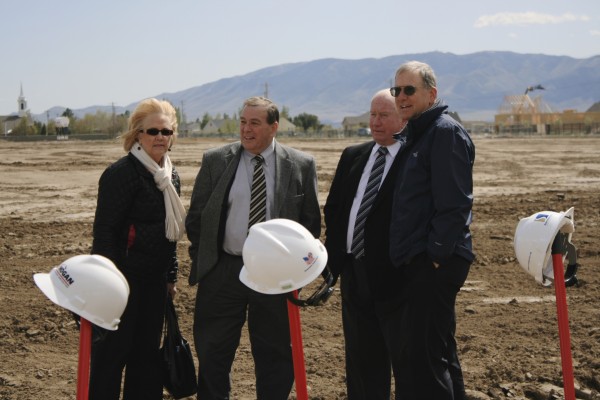 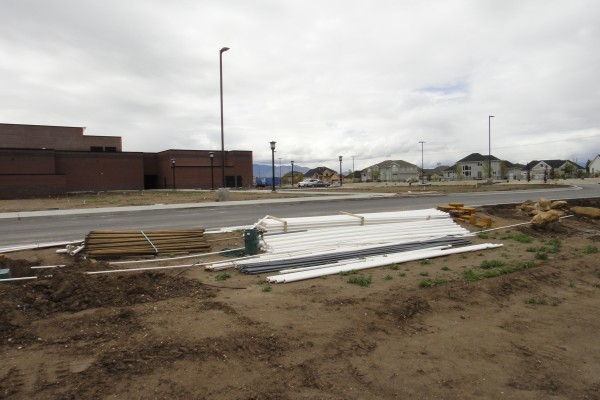 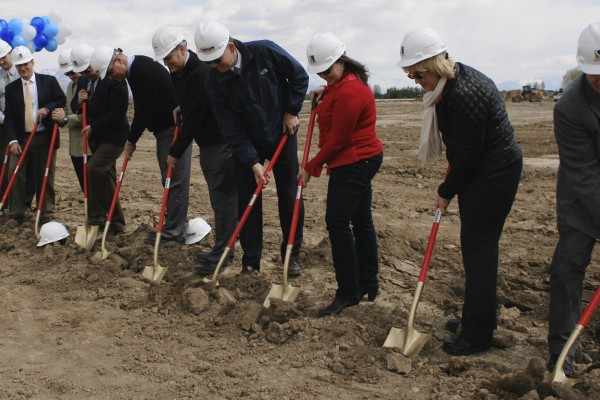 Skyridge Groundbreaking Ceremony, April 29, 2014. Members of the Alpine School District Cabinet and Board, State School Board, and construction team members. 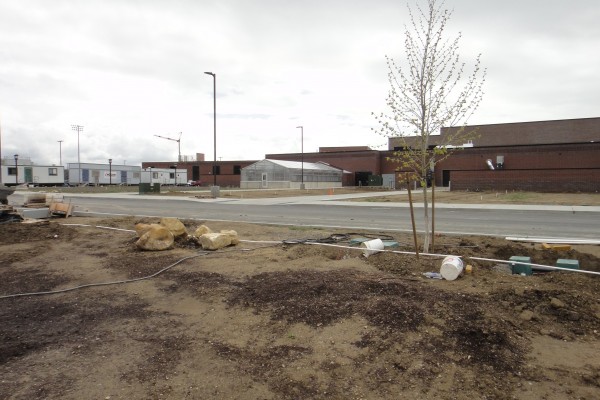 Two years ago today, the Alpine School District held a groundbreaking ceremony for the future Skyridge High School. Here are a few photos from that day with comparison photos of the same areas now. 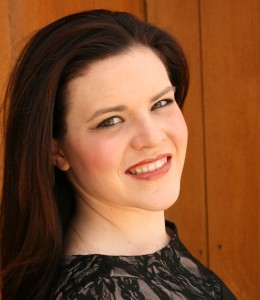 Jessica Adams has been hired as the Ballroom Dance Team Coach for Skyridge High School. She has been dancing various styles for 22 years including Ballet, Jazz, Tap, Hip Hop, and Ballroom and has also been teaching these styles for over ten years.

She started dancing ballroom during her Senior year at Lehi High School. After graduating, she attended UVU where she was a member of the UVU Ballroom Dance Tour Team. While on the team, Jessica trained under instructors Paul Winkelman, Ryan and Ashley DiLello, Chris Williams, Tara Boyd, Michael Johnson, and Chris Witt. As a member of the team, she was privileged to represent the United States at the International Folk Art Festival in China in 2013. In 2014, she was able to return to China with a small group of ambassadors to build relations between the UVU Ballroom program and China’s CFLAC branch of government. Last year she represented the United States at the International Blackpool Dance Festival in England, where her team placed 1st in Ballroom formation and 3rd in Latin formation.

Jessica’s vision for the Skyridge Ballroom Team is one of respect, unity, creativity, and success. Throughout the year, her students will be taught more than technique; they will find unity and respect for one another as they support and encourage each other through rehearsals, performances, and competitions. Upon graduating from Skyridge, her ballroom students will not only be successful dancers, they will be exceptional individuals, capable of success in everything they do.

Jessica is finishing her degree in Marketing at UVU. In her spare time, she loves baking, outdoor activities, spending time with her husband, and volunteering as the Executive Director of the Miss Greater Salt Lake/Miss Timpanogos Scholarship Organization.

Here are the links for the sign up sheets for the auditions for MDT and Drama 4:

Here are the links to the forms for the drama department surveys: 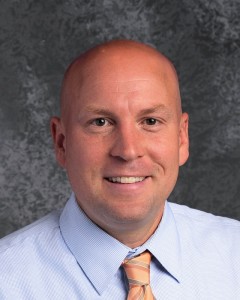 Kevin Henshaw grew up in Utah County, where he attended Alpine School District schools, and is currently completing his third year as an assistant principal at Frontier Middle School. Prior to his administrative duties there, he taught reading and math at Orem Junior High, and taught and coached basketball in Idaho. He received a bachelor’s degree in business marketing from the University of Phoenix, and a master’s degree in educational leadership from Western Governors University. Mr. Henshaw and his wife Cristy (a special education teacher at Mountain View High School) live in Highland with their three children. He is an avid golfer and loves mountain biking. 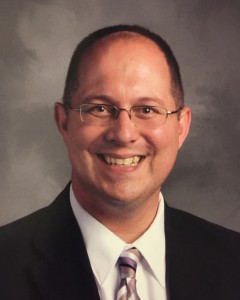 John LaBare is also a product of the Alpine School District and is a graduate of Orem High. He has been an educator for the past eighteen years, spending the last ten years at Lehi Junior High School, most recently as an assistant principal. Following high school, he served in the US Navy aboard the aircraft carrier USS Ranger, traveling to Asia, the Persian Gulf, and eastern Africa. He obtained a bachelor’s degree in physical science and a master’s degree in educational leadership from Brigham Young University. Mr. LaBare and his wife Robyn (a 2nd grade teacher at Eaglecrest Elementary) live in Eagle Mountain with their five children. He loves spending time with his family (especially in the outdoors), is a self proclaimed “science fiction nerd,” and is excited to continue working with so many students as they move on to Skyridge. 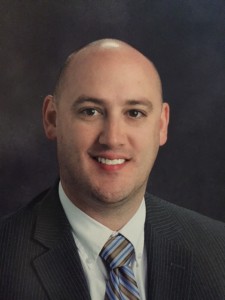 Thomas Paul grew up in north-central Massachusetts and spent his high school years in Colorado. He began his career in education working in the special education department at Timpview High School and then spent seven years as an English teacher/yearbook advisor at Mountain Ridge Junior High. He is currently the assistant principal at Traverse Mountain Elementary. He earned a bachelor’s degree in English education from Utah Valley University and a master’s degree in educational leadership from Brigham Young University. Mr. Paul and his wife Mandi have three children and currently reside in Pleasant Grove. He loves spending time with his family, golfing, watching live theater or sporting events involving BYU or Boston teams, and various outdoor activities.

The Alpine District Spring Break is April 4-8. We will return to the office on April 11. Thank you for your patience as we work to update our website. In the meantime, please use the “search” option above if there is something specific you are trying to find. Here are the upcoming events for Skyridge High School:

Musical Dance Theater/Drama: Come meet the new Director of Theater Arts! Tuesday, April 12 at 6pm in the MEDIA CENTER at Lehi Junior High. Learn more about the audition process for MDT and Drama 4 and the future of the program.

Wrestling: Come meet Coach Mangum and learn about the future of the wrestling program. This event is for all future participants (K-12) and their parents. Tuesday, April 12 at 7pm in the AUDITORIUM at Lehi Junior High.

Swimming: Parent/Participant Meeting on Thursday, April 14 at 6:30pm in the cafeteria at Lehi Junior High.

Women’s Soccer: For those who missed the meeting last month, click here for the handbook: Women’s Soccer Handbook